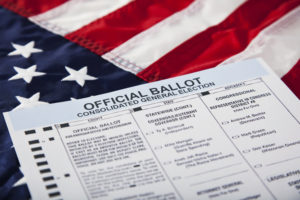 Four candidates are seeking two open seats on the Menomonee Falls School Board. Incumbent Michael Noshay is seeking re-election while Keri Duce, Candice Green and Lowell Kellogg are seeking to join the board. The general election will be held April 3. The four candidates recently answered questions during a March 22 forum organized by Parent Teacher Organizations (PTOs) in the district.

Noshay is finishing his third term on the board and is married with three grown children who graduated from the district. He is chairman of the Curriculum and Learning Committee and is a member of the Finance Committee.

“We’ve seen some tremendous outcomes and improvements in the student learning in both math, science and English and I hope to continue that trend,” Noshay said.

Kellogg moved to the village in 1999 and was employed as a science teacher in the district from 1997 to 2013. He served on the Menomonee Falls Fire Department for five years and is currently an educational assistant at Milwaukee Area Technical College.

“I’m just here to make a difference. There’s a lot I can offer with my institutional knowledge of how the district actually operates from those that are in the trenches day to day,” Kellogg said.

Green is originally from Texas and has been in Wisconsin for three years. She has two children in the district and has a background in government. She worked as a substitute in the Texas and has a college degree in psychology and a minor in sociology.

“I’m really here because I want to advocate for our kids and I want to see Menomonee Falls be the great place I grew up in.

The candidates were asked what motivates them to serve on the board.  Duce said she sees “what a great experience my kids have every day” when giving time for children at events.

“I’m here because I’m excited about our schools and I want to help,” Duce said.

Green said “the thing that motivates me to serve on the School Board the most is our kids — that’s what we’re all her for.” She said she wants to learn more and contribute what she has learned to the district.

Kellogg noted he has a background in education and public safety. He noted that as a 16-year district employee he saw trades classes being eliminated.

“I think there’s a segment of our population that’s greatly ignored. I want to advocate for the kids no one pays attention to,” Kellogg said.

Noshay said that while on the board he has worked with some of the most talented teachers, administrators and students in the country.

“That has motivated me to  improve their educational outcome. We make a difference every day on the board,” Noshay said.

The candidates were asked to describe their background and qualifications for the board position.

Green noted past government work which she said “gives me a lot of structure. I’ve learned to deal with people who are maybe in higher positions than myself, maybe in lower positions than myself. I’ve learned to deal with people very effectively.” She also noted she has worked as a substitute teacher, which she said “is probably even harder than being their day-to-day teacher, because obviously their teacher has a tight rein on them that a substitute may not.”

Kellogg noted that after he was laid off by the district, he had to “re-tool” himself and got a technical diploma in fire service.  He later undertook technical emergency medical support training and completed study to get a designation as a Wisconsin School Safety Coordinator.

“I have a vested interest in education as well as public safety,” he said.

Noshay noted that in addition to being a parent who has had three children go through district schools, he has worked in health care and education during his career. He added that being on the board for nine years, he “understands the inner workings of the school district for each school and each building. It’s very insightful and very rewarding.

Duce said “I have a had a great experience here” and had a great education in the district. At UW-Milwaukee, Duce has been involved with raising retention rates and transfer and articulation agreements.

“It’s not just about getting our kids from the Falls to college or from Falls to a tech school, it’s figuring out what’s best for every individual kid,” Duce said.

The four candidates were asked what their main priorities would be if they were elected to the board and what committees they would be serving on.

Noshay said that while on the board, he has focused on the Curriculum and Finance committees. He said those committees need to be tied together because there needs to be a balanced outcome, and that education needs have to be tied to what the district will spend on it.

The candidates were asked about the role of the board in drawing and retaining teaching staff while staying competitive with other districts in terms of salaries and benefits.

“That is the magic question,” Noshay said, noting the board has spent time benchmarking in comparisons to other districts to ensure the benefit and compensation packages  are “interesting and energizing for our staff. That said, there are fiscal realities that need to be balanced against it. We have budgets that we have to balance each and every day, each and every year.” He said the board has spent time to ensure teaching staff has pathways to growth and is appropriately compensated.

“We want to make sure we’re hearing from them — that their classrooms are in good condition, their supplies they need are in their rooms to the best of our abilities.” In addition, Duce said the district has ensure that class sizes are manageable and professional development opportunities are provided as well.

Kellogg, who previously noted he was laid off by the district, referenced that fact in his response.

“I feel quite qualified in saying this: The School District of Menomonee Falls has done an outstanding job in purging a lot of the older teachers. One of the issues the school district is going to have is a revolving door of very young, inexperienced teachers coming in, getting hired, getting the life sucked out of them,” Kellogg said. “We need to figure out a way to retain these young teachers that have taken over from the experienced teachers that the school district has successfully purged.”

The candidates were asked about their perception of safety in the Menomonee Falls district and how it could be improved.

Green emphasized she didn’t want to make light of safety issues around the country, but said “I feel totally safe sending my kids to school in Menomonee Falls. I don’t see a huge safety issue here.” She added that teachers and administrators need to stay trained to identify potential problems.

Kellogg noted his training in safety issues and said “it’s the new mainstream.”

“You can’t be complacent with everything, you can’t assume you live in a safe community. I think our school are safe, but there’s always things you can do to improve and a lot of that is training,” Kellogg said.

Noshay said “there’s no trivializing safety in our schools.” He noted that the district has relationships with the Police Department, and does mock drills with law enforcement and first responder agencies. Noshay said all district schools are locked and said the district evaluates safety issues to ensure it is in accordance or surpasses state or federal guidelines.

Duce said the district has done a great job making sure building entryways are safe. She added she wants to examine mental health services are provided for students and what is done in terms of anti-bullying efforts.

“My perception: I agree, when I go into the schools I feel safe. I want the kids to feel just as safe as I do,” Duce said.

Comparison to other districts

The candidates were asked for two items that sets Menomonee Falls apart from other school districts in the area.

“There are so many wonderful things on here,” Noshay said. He mentioned the several Kohl scholars students and the Principal of the Year honor for Riverside Principal Scott Walter as part of the change in the district.

Duce cited “a great balance of educational opportunities” and noted good test scores. She added the village has grown compared to when she was raised in the area.

Green said she impressed with the “top shelf, top of the line” services offered by the district.

“I think the continuous improvement that’s being done is quite awesome,” she said.

Kellogg said the village as a “small  town feel to it.” For the district, he said there are “a ton of options for kids to do” in terms of clubs, sports and other activities.

Green referenced her past work experience and educational background and thanked people for attending the forum.

Kellogg noted that he previously ran four times for the board and encouraged people to vote.

Noshay noted his wife encouraged him to run for the School Board after she tired of hearing him say “I can do that.” He said he has been blessed with an “amazing” set of board members, administrators, teachers, students and active parents during his time on the board. He mentioned the growth of district career academies and said a key challenge is balancing budgets so that home values continue to increase for community members who don’t have students in the schools.

Duce said she feels she can help and contribute to the board. She said she is enthusiastic, a hard worker and wants to be an advocate for kids in the district.