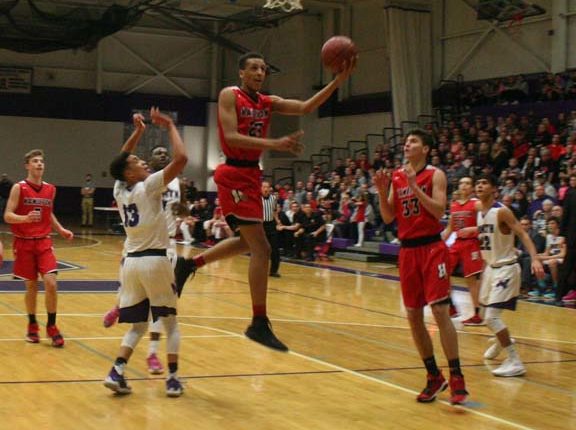 The Sussex Hamilton boys basketball team rallied from a second-half deficit against Kettle Moraine and then shut down the Lasers offense in the closing minutes of the March 10 sectional final in Oconomowoc, winning 63-46 to send the Chargers to the state tournament for the first time in 31 years.
Sussex Hamilton will play Oshkosh North in a Division 1 state semifinal at the UW-Madison Kohl Center March 10, with the game starting at 6:35 p.m.
In the sectional final, Kettle Moraine took the early lead but Hamliton stayed close throughout the first half. The Lasers entered halftime with a 28-24 lead.
The Lasers opened the second half with an 8-4 run to take a 36-28 lead following a basket by Michael Payant with 14:25 remaining.
Hamilton then rallied late in the game, going on a 15-2 run. The Chargers took a 43-41  lead with 5:54 remaining when Lucas Finnessy converted two free throws. Tanner Resch then converted two three-point baskets while Finnessy converted a layup to give Hamilton a 51-43 lead with 3:01 remaining.
Hamilton then held Kettle Moraine to three points the rest of the way to seal the victory. Resch led Hamilton with 18 points while FInnessy added 17 points.
0
Share
Express News

From the newsroom: Free Spring Fishing Clinics for Kids at 11 park lagoons April 14