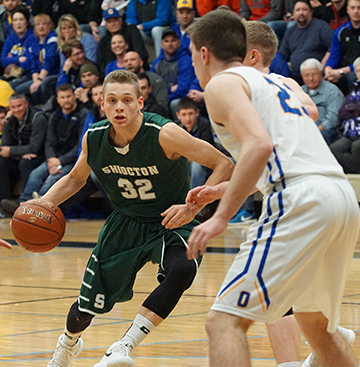 By Greg Bates
ACN & Times-Press sports correspondent
For the first time in program history, the Shiocton boys basketball team played in a sectional final.
The players had hopes of heading to the WIAA Division 4 state tournament, but that dream came up just short.
A big, athletic Marathon team wore down Shiocton in the second half and came away with a 60-48 victory at Wausau East on Saturday, March 10.
“We hung in there really well, but we needed to shoot better,” Shiocton coach Chad Schmidt said. “I felt like if we could shoot it better, I knew we’d get some looks. And we did, we just couldn’t get the ball to fall.”
The Chiefs shot just over 30 percent from the field and hit six 3-pointers.
Shiocton didn’t have as much depth as it usually does. Three of its top bench players missed the game: Deven Bedor was nursing an ankle injury from the team’s sectional semifinal victory, and Jack Fielding and Jordan Ott were on a school field trip.
“We had to have a couple of other guys step up, guys that have primarily been JV the second half,” Schmidt said. “It’s not an easy puzzle piece to put together because when they don’t get a lot of reps, they don’t always remember what we kind of do.”
Marathon features a solid inside-outside game. The Red Raiders have a pair of guys who shoot over 45 percent on 3-pointers. Nathan Stoffel, a 6-foot-5 monster inside who is a University of South Dakota football signee, had a big game with 21 points.
“They got us on the physical piece, no doubt about it,” Schmidt said.

“They’re the best inside team we faced all year. They’ll deliver from the top, they’ll deliver from the side. If you’re fronting them, they’ll slide out a little bit and go get it, and then they’re attacking you.”
Shiocton (19-6) went on a 7-0 run to go up 23-22. But Marathon’s Cameron Schilling nailed a 3-pointer at the buzzer to give his team a 30-28 lead at halftime.
“We felt good where we were,” Schmidt said. “We were hoping to wear them down a little bit.”
Shiocton took the lead back for the final time of the game, 35-34, as Matt Peterson converted a layup with 13:28 remaining.
Marathon (22-4) answered with a 6-0 run. Shiocton’s Corbin Lorge hit one of his four 3-pointers to make it 40-38, but Schilling hit a shot and Marathon added a pair of free throws to bump its lead back up with 7:29 left on the clock.
“We had two chances for a couple of bunnies that just didn’t fall for us,” Schmidt said. “It got to be four and missed again, it got to be six. We got to that stretch there where we couldn’t hit a basket.”
Down the stretch, Shiocton got within four points, but could never get over that hump.
Marathon flustered Shiocton with its 1-3-1 defense, utilizing its long and rangy players. The Chiefs committed 18 turnovers.
“We haven’t seen that type of 1-3-1 with that type of athleticism and length,” Schmidt said.
After scoring 28 points in Shiocton’s victory over Oconto in the sectional semifinals, Peterson scored just six points in his final game. Fellow senior Wesley Brouillard had five points. The duo combined to average over 25 points per game during the season.
Super sophomores Lorge and Austin VandenBosch had big games. Lorge scored a team-high 18 points and Vanden Bosch added 16.
Shiocton closed out its season with 19 victories, which is the third straight year of 17 or more wins. Schmidt couldn’t have been happier with how his team played all season.
“I’m really pleased with how we developed into the new roles, especially with some of the adversity we had with Derek (Bedor) with mono and Matt (Peterson) with the fractured ankle early on and Joe (Herrmann) with a fractured thumb recovering from surgery early on,” Schmidt said. “I was super pleased with our performance as a group to be able to play as well as they did together with seniors and sophomores. It doesn’t always happen really easily.”
Shiocton loses a strong senior class with starters Peterson, Brouillard and Herrmann and two reserves, Ott and Kyle Stedjee. Peterson and Brouillard were three-year varsity players who helped the Chiefs go 37-5 in conference play and captured two regional titles during their careers.
But the future is bright for Shiocton. Lorge and Vanden Bosch will lead a talented sophomore class, and Schmidt has a good freshmen group as well.
The seniors helped the young players mature this season, and the guys will be better off come next season.
“Those guys got to see really, really good leadership and the way things are done and how kids take things seriously in practice, what we do in games,” Schmidt said.
“We’re not going away. We’re going to have a presence in the sectionals, and hopefully we can bust through in the next couple of years. Right: Jack Fielding fights for the shot against a Marathon opponent, Shiocton lost 60-48 at Wausau East on Saturday, March 10. – Photo by Dave Gomm
Left: Sophomore Corbin Lorge drives to the basket against a big, athletic Marathon team who wore down Shiocton in the second half and came away with a 60-48 victory at Wausau East on Saturday, March 10. Lorge scored a team-high of 18 points.