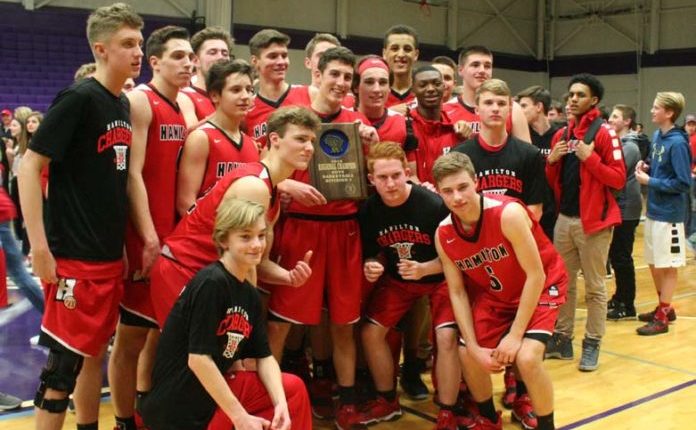 0
Share
By Thomas J. McKillen
The Hamilton boys basketball team just missed pulling off an upset at the WIAA boys state basketball tournament, as a three-point attempt by Carson Smith with 2.2 seconds left just missed as Oshkosh North held on to win 57-56 in a Division I semifinal at the UW-Madison Kohl Center March 16.
The top ranked Spartans dominated Hamilton in the first half, as the Chargers offense was stymied by Oshkosh North’s 1-3-1 zone. Already leading 23-10 with 7:13 left before halftime, North scored eight straight points to take a 31-12 lead following a tip-in by Tyrese Halliburton at the 2:54 mark. Hamilton closed the gap slightly, and trailed 33-16 at halftime.
“Early on, my biggest fears came to fruition. We felt we needed to be aggressive against their zone, and we weren’t. We felt we needed to take care of the ball, and we didn’t. We said we needed to shoot the ball well, and we didn’t. Boy, we spinning a little bit — thank God for those media time outs, because they saved us a few times,” Cerroni said.
At haltime, Cerroni said he talked about taking care of the ball, defending balls, and “take the courage to take tough threes (three point shot attempts).”
The Chargers gradually cut into the North lead throughout the second half and tied the score at 56-56 on a three-point basket by Tanner Resch with 1:13 remaining. North then ran time of the clock and Halliburton got to the free throw line with 19 seconds remaining. Halliburton converted his first basket but missed the second. At the other end of the court, a jump shot by Patrick Baldwin Jr. was blocked and went out of bounds. Following several time outs, Smith attempted the final shot of the game.
“I thought we had them at the end there,” Cerroni said.
Halliburton led all scorers with 34 points while Baldwin led Hamilton with 22 points.
Hamlton, which beat beat three higher-seeded teams at the regional and sectional levels to get to the state tournament, finished the season with a 17-10 record.
“I couldn’t be prouder of my kids, I couldn’t be prouder of my coaching staff, I couldn’t be prouder of our community with the support we had,” Cerroni said. He added the team “really exceeded expectations by so many people except themselves because they had expectations throughout the year. I’m really proud of how we represented Hamilton basketball in our community.”
Cerroni also offered praise for North.
“They are very well coached and we knew coming in. They caused a lot problems for teams throughout the season and the frustrated a lot of teams, and they did that in the first half — I just want to congratulate them,” Cerroni said. “No matter what, that’s a very good team representing the state of Wisconsin the final, I’ll tell you that.”
0
Share
Express News

From the newsroom: Free Spring Fishing Clinics for Kids at 11 park lagoons April 14