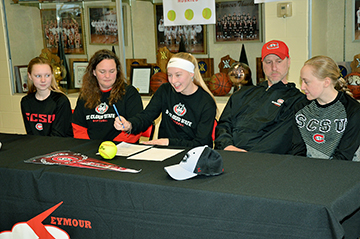 Raven Vanden Langenberg signs her letter of intent to St. Cloud University for softball. Her club softball coach, Kevin LaPoint said that Raven brought a spark to his team and every team needs a teammate like Raven, every coach asks for one more day and he gets to watch her with his daughter for four more years as she signs for St. Cloud.
Family and friends, teachers, students and coaches attended the signing.
Vanden Langenberg thanked everyone for coming and supporting her. This has been her dream for as long as she can remember and she was happy to share it with family and friends. She thanked her parents for their love and support, endless car trips they endured and sacrifices that they made to make her the best person and player that she is today.
Vanden Langenberg thanked her mom and talked about how much she will miss her and how she will have to learn to cook now since she is going to college.
She thanked her dad for coaching her since she was little and always wondered why he was always harder on her. She said he was always there for her when she needed him and she loves to make him proud.
She then thanked her sisters Kylee and Brynn, and admitted that she will miss them also.
Vanden Langenberg told a story about her sister Kylee, stating that she was really hungry and asked Kylee to make her a potato.
If she refused Raven was going to take Kylee’s thank you out of her speech. Raven said, “it was a really good potato.”
She told Brynn to keep pushing herself in sports and remember that their dad does know what he’s talking about – sometimes.
She thanked her grandparents for all their support and for traveling to her games.
Vanden Langenberg thanked her coaches Jason Setliff and every other coach that taught her over the years, not just in softball but in all the sports she was in.
Last but not least she thanked her teammates, and said she would not be where she is today without them.
Karrie Vanden Langenberg, (second from left) Raven’s mother and softball coach said, “We have coached Raven all her life and as a family we talked many times about putting our “coach’s hat” on and then having to switch and put our “parent hat” on. Today I decided that it was more important to support her with my “Parent hat.” Raven Vanden Langenberg (middle) with her family, left to right, sister, Kylee, mother Karrie, father Todd and sister Brynn.