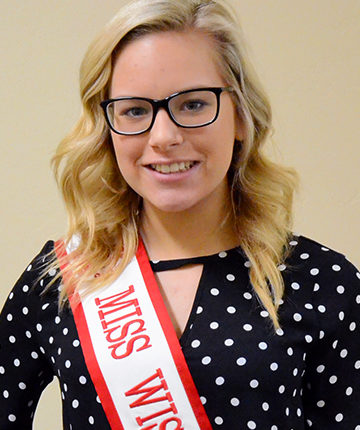 Belle VanBoxtel was named the new 2018 USA National Miss Wisconsin Jr. Teen on Saturday, Feb. 24 at the Wisconsin state competition that took place at Southwest High School in Green Bay.
She will now travel to Orlando, Fla. to represent Wisconsin at the National competition from July 1 – 8 and vie for the National title of USA National Miss Jr. teen.
Delegates came from across the state of Wis. and competed over a weekend (starting on Thursday.)
VanBoxtel had to compete in three required phases of competition: Interview, Evening Gown and Runway. These competitions along with the entire competition weekend were to teach young ladies poise, grace, empowerment of each other, and self confidence. All delegates also had a private tour of Lambeau Field, lunch with new friends and a Pink Party where they were able to continue to bond and share the philanthropy work they do within their own communities. By the end of the competition weekend, no matter who took the overall title, crown, banner, and prize package home; they all took home new found friendships, memories, and skills to last a lifetime.
VanBoxtel said, “When I was younger I competed in a pageant called NAM, National American Miss and I was the top runner-up against around 170 other girls.”
She also participates in All Star Cheer which takes up a lot of her time but was invited to try-out for this pageant through some connections with the All Star Cheer program.
VanBoxtel said, “I was bullied for four months verbally and through social media and decided to make my voice heard through this pageant.”
She said her inspiration was Brittany Georgia who she met through All Star Cheer. Georgia pursued her dream and is now Miss Colorado, and VanBoxtel thinks she is a great role model and can’t wait to see her again at Nationals.
VanBoxtel said she learned so much from her experience and it was an amazing opportunity for someone as young as her.
She feels more confident and empowered as a young lady through this experience.
VanBoxtel is also a straight A student and dedicated athlete at Northern Extreme Athletics (All Star Cheer) where she practices in Wausau three times a week.
This pageant is not just a beauty pageant, it’s about being a leader, gaining confidence, healthy living and becoming a role model for the younger girls.
VanBoxtel used her platform to bring awareness of bullying, teen suicide and the need of donations for the local humane societies. She will be making appearances throughout the year, traveling and being a voice for her platform. She also brought awareness to the Seymour police department K9 fundraiser, where they have met their goal.
VanBoxtel is in the seventh grade and 12 years-old and remarked for her birthdays she asks for dog and cat food to donate to the local humane societies.
She would like other girls to follow her footsteps and she is a good inspiration for all young people. Her parents are very proud of her.